How is your weekend going? I hope it's been a BLAST. Mine has been nice, but I truly believe someone is tricking me time-wise, because the working days never go by so fast. It's suspicious.

Last weekend I was in Berlin visiting a dear friend of mine; can you guess what I brought back home? Marzipan? No. Beer? Nope. 18 bottles of nail polish. YEAH! Plus I had 6 more as a present, which gives us a total of 24 new bottles of polish, infinite combinations and mind colapse due to the well known "which one am I going to wear first?!" syndrome.

The first lucky pair of the bunch were Essie Lapiz of Luxury and Ciaté Glametal. While I loved this combination, I had a hell of a time doing this manicure. The story comes after the break: 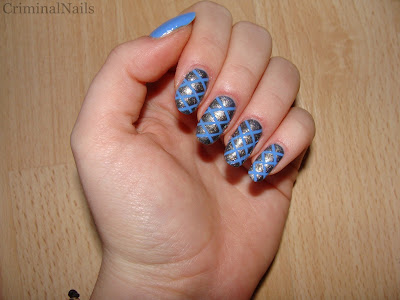 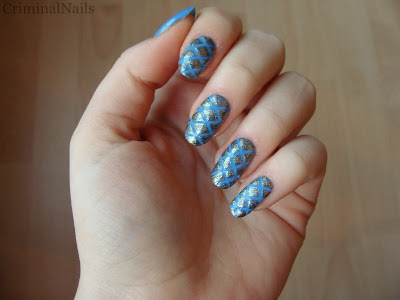 I have a MASSIVE problem right now. I'd dare to say it would be a tragedy for any of us polish addicts lovers. I ran out of top coat *sobs*. Worse than that, I ran out of any of my preferred top coats. So let's see:
1. INM Out The Door: empty.
2. Seche Vite: extra thick, gooey and bubbling prone.
3. Poshé: empty.
4. Why on earth would I need a fourth favourite?!

That's what happened: none of them can be bought phisically in Spain, so I need to restock periodically via eBay. Thus, as any other time, I checked my fave sellers' stores and bought 2 INM's in advance. One month and two weeks in advance, to be exact. I was so naïve that I thought I had plenty of time before any of the other bottles would be emptied, and honestly the idea of running out of all of 'em never crossed my mind.

BUT my trusted eBay seller, Ms. Glitzandglamorize, let me down this time. Shamelessly, I might add. 20 days after shipping I contacted her, telling her I was worried because her packages never took longer than 10 days to arrive, and asking her if she was aware of any problem. She replied in barely three sentences telling me to be patient because the usual delivery lapse was one month. I was surprised, because in more than four years not a single package had taken more than 10 days to arrive... But I waited. Until a month and a week had passed. And I contacted her again.

She unblushingly replied that I had to keep waiting because the delivery could take an entire month. At this stage I was completely pissed off. This lady had not taken the time to read the content of my emails, and her lack of proper reply was unacceptable. And more so when items acquired after my purchase to her had arrived from China before that package. China, for christ's sake. And even more so when another seller had just contacted me fo he was concerned that I had not received his package yet (again, sent from China) after 20 days, asking me if I could take the time to wait and offering me a refund or to ship it again. What a difference, don't you think?

So I bought my top coats from another seller, left Ms. Glitzandglamorize a bad evaluation and asked for a refund. She didn't even reply to me. She refunded me partially, and after inquiry she told me she had charged me a fee. Un-fucking-believable.

All that story is to make public such a bad service in case it can help anybody in determining who to buy from in eBay. But also to explain why my activity here has been slightly lesser than normal. I hope this situation will be fixed soon and that I'll be back to polishing as always. I have to face the fact that I am nobody without my top coat ;)

Have a nice Monday (I know, it's paradoxal).