I hope your weekend was good! Mine was / is being just meh because we here in Barcelona have what we call a "bridge" (a Friday or Monday off, added to a regular weekend = a bridge), and I get to work 2 out of 3 days.

So in order to cheer me up in those long hours of reading case laws, I decided to have something cool. I had never noticed that I am kind of drawn to combine blue and pink, but I am forced to face it is so when I take a look at my archive. I need to stop being so predictable ;) 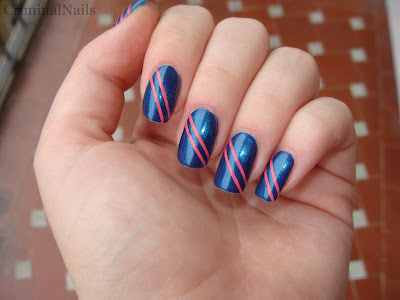 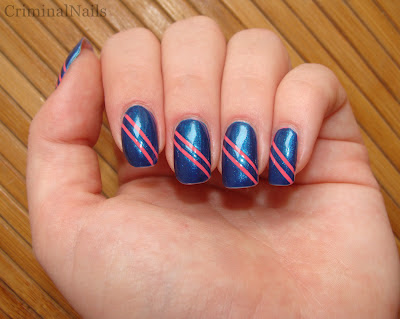 This is two coats of Barry M Pink Flamingo and one coat of Kiko nº 300 Pearly Malachite Green. And a coat of Seche Vite, which kind of freaks me out now. Do you notice how it shrinked? My tips are already showing and there are some breakages in my index and middle fingers. Seriously, SV, I am warning you. I love you most dearly, but I won't stick with you at all costs.

Any good alternative to the ever-shrinking SV?

Oh! I just remembered something that happened to me last year. At that time I thought "if I had a blog I'd post about that, hands down". I guess now is the time!

So the story goes like this: I was in London, and I had some free time. So I decided to walk around and give me one cool manicure. I had thought of a clear base and bright blue tips; funky french kind of stuff. My steps (and the subway) took me to Chelsea, where I found a little salon that was having a promo for manicures. I thought myself lucky at the time; I couldn't be more wrong.
I entered, and was suprised when the lady told me they were about to close. Yeah, I had my Spanish schedules in mind (our shops close at 20h30), my bad. Well, she said I could have a plain mani, and I thought: let's go.
So I was made to sit in front of a young lady, she was totally inexperienced. I mean: TOTALLY. I picked a color and un-luckily the bottle was half empty. That girl, she looked like she was called Brenda, did an awful job. It was seriously the worse mani I have ever had. Counting the one a friend gave me a while back, and he was a man.
So, as the bottle was half empty the brush came out half empty each time, and Brenda needed to dip it in the bottle several times per nail and coat. She turned the bottle upside down, and I can tell she struggled: she licked her lips just like children do when they are concentrated, you know? It was a deep effort there. The polish dragged, and pooled. In the end, I had half bald spots, so the color was not uniform at all. And Brenda's conversation was plain, and oh-so-boring!
The worse thing was what she did between coats.

SHE BLEW ON MY NAILS.

In each and every one of them, for Christ' sake. And when she thought she was done, she asked: are you happy? I was totally astonished, and kept looking for a hidden camera somewhere in there. Brenda looked like such a sweet and dumb lady that I said I was happy.

I paid 13 pounds for something I took up the minute I arrived to the hotel; you can tell I cried on the inside. And I was ashamed to hold myself to the bars in the subway, because anyone could see that mess.
I can't believe I forgot the name of that salon...

With that said, have a nice week :)