Hey there!
I started working on a big law firm a few months ago, and honestly I was worried about what colours I would be allowed to wear at work. I wasn’t brave enough to go and ask my boss, he wouldn’t have a clue anyways. I mean, it’s not the kind of stuff you think about every day, not even when drafting the Company’s protocol (just imagine: Clause 21.3.3 – Nail lacquer: Allowed colours. C’mon…). So I preferred to be more subtle. I remember starting with a grey polish (Mavala Elle’s Grey, a limited edition), then some safe red, then pink, bright pink, some shimmer, some blue, and so on. I wore everything as a full manicure. And then… 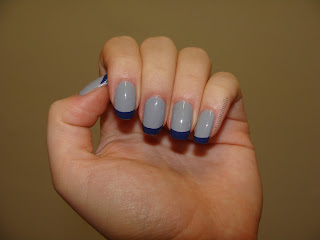 I did this one. It’s 2 coats of Zoya Dove and China Glaze First Mate for the tips. I didn’t freehand the tips, I never tried and I KNOW I would fail, so I bought Nailene’s French Tip Guides instead and job done!
After such a fuss, such planning and trying to be smarter than smart, no one reacted. At first I thought “I’ve been losing my time”, and then… I realized the best reaction you can expect in this ecosystem is that nothing happens. Think about it: if no one remarks anything it simply means that it’s normal. Now, were blue nails normal before I started working in that department? Maybe, or maybe not. We’ll never know. 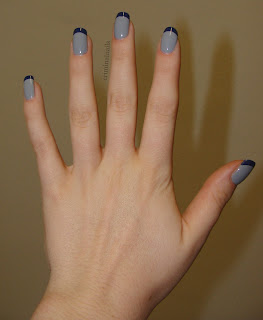 I have to point out that no one remarked anything out loud immediately, but my boss told me at my 6 months evaluation “Well, I like to have different people on my team. Yeah, you’ll have to admit that you’re quite special, with your nails and your longboard…”. The longboard wasn’t mine, but that’s another story. The nails most certainly were! And yes, I’m on a department that works somehow apart from the rest, where the protocol becomes less tangible, where me and my nails suit better.
I’m currently on a different department (for 4 more months) where I have to keep a low profile nail-speaking. So welcome “boring” manis, and see you in the weekends in-your-face-goodness.
I felt like doing a revival post, so I hope you enjoyed it!
Take care!
Posted by M. Fourey at 12:39